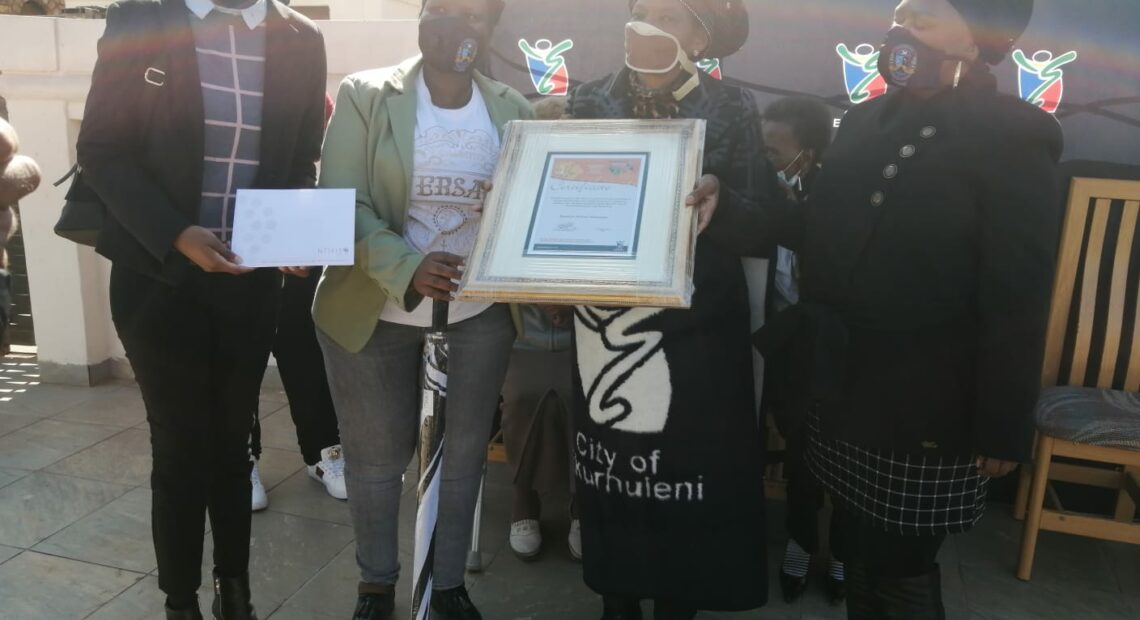 In commemoration and recognition of Women’s Month, the Women’s Directorate in the Office of the Executive Mayor honoured struggle heroines within the City for their contribution and participation in the 1952 Defiance Campaign and also the 1956 women’s march.

True legacy lives through stories passed down from generation to generation. The essence of our history the accounts of these iconic stalwarts were relived through the “Tell her Story” campaign, when Member of Mayoral Committee (MMC) for Health and Social Development Cllr Nomadlozi Nkosi and Women’s Directorate Divisional Head Lindiwe Khonjelwayo visited five struggle heroines in their homes and presented them with distinguished certificates of honour, and other goodies for their service to the nation.

Noyi Mtshali (85) from Wattville in Benoni was one of the women honoured. She was a volunteer of the Adelaide Tambo battalion who soldiered on at the height of the resistance against pass laws. She said dislodging the enemy was their daily prayer and cohesion, adding that unity kept them alive in trying times.

Another Benoni heroine honoured was 86-year-old Winnie Mahlangu “Umafungwase” (female first born), the first black female DJ on Radio Bantu (now Ukhozi FM).  Mahlangu was a DJ in the dark days of discrimination against woman and black people in the 1960s. She held this role for 30 years, empowering rural and urban women. Dubbed the ‘princess’ of the airwaves, Mahlangu was pivotal in the fight for women’s right through radio at a time when broadcasting was dominated by males.

Adelaide Zuma Liphoko from Katlehong, a surviving activist of the 1952 Defiance Campaign that led to her arrest on 27 December 1952, was also amongst the women honoured. She rose with the song “Igama Lamakhosikazi Malibongwe” meaning ‘praise be to women’. She stated that their resilience to fight against the enemy came from the pain of seeing their parents working like slaves.

“It was not easy being part of the struggle at the age of 15. We were arrested several times, but kept going against the stubborn oppressor because all we wanted was freedom. I lost many jobs because as a member of the African National Congress I was constantly labelled as an enemy of the oppressors,” she said.

Adronica Masangane Matlala (74) from Germiston was 10-years-old when she, like many other women, woke up on the morning of 9 August 1956 and went to Esquereni in Dukathole, hopped onto a lorry that took them to the Germiston Station. Here they boarded a train to Pretoria for the march which attracted a field of over 20 000 women at the Union Buildings.

Matlala commended and encourages the City to continue sharing historic events of the 1956 march.

“It is a great pleasure that the City honours these women who were at the forefront of today’s democracy.

These women, and many others, dedicated their lives to fighting for freedom and the emancipation of women. They have taught us that there is no force more powerful than a woman determined to rise. South Africa is free because it stands on the shoulders of these giants,” said MMC Nkosi.