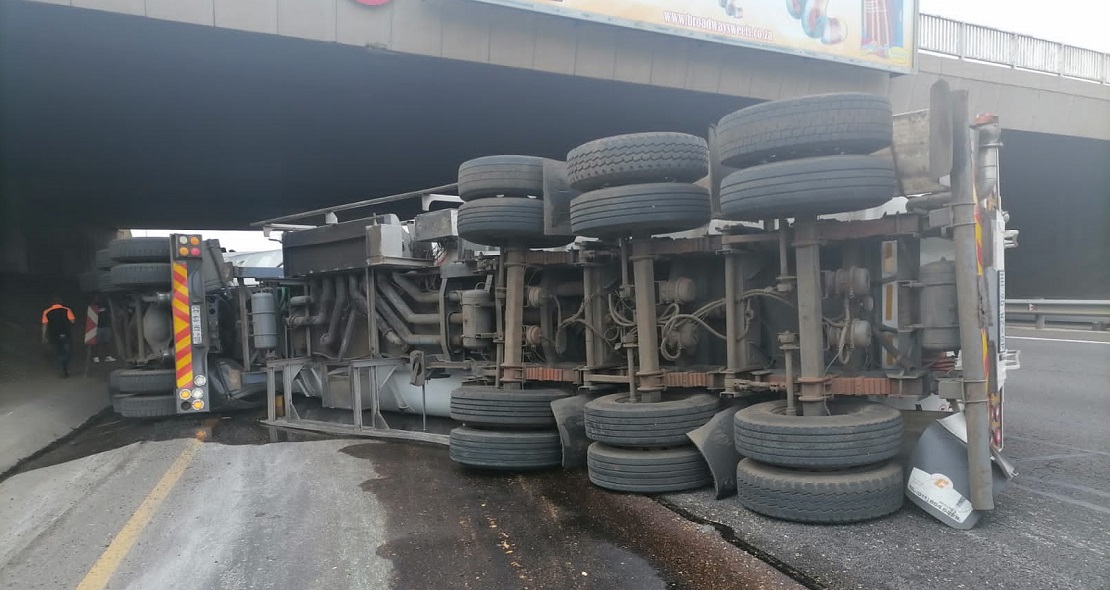 Four sustained minor injuries in an accident involving three cars and a truck transporting 10 000 liters of paraffin on the Albertina Sisulu (R21) Freeway near Atlas Road on-ramp on 23 October.

According to Ekurhuleni Metropolitan Police Department (EMPD) spokesperson Kobeli Mokheseng, preliminary investigations revealed that the 22 wheeler truck’s tanker flipped as the driver swerved to the left avoiding to crash into a vehicle that lost control, crashed into steel barriers and affecting another motorist before the tanker flipped onto a stationary bakkie.

A 50-year-old female whose vehicle lost control, was rushed to ARWYP hospital for medical treatment for injuries sustained.

“Two female occupants age 21 and 31 from the affected vehicle and the 35-year-old truck driver, sustained slight injuries and promised to consult their own doctors for medical treatment,” Mokheseng said.

He added that fortunately, there was nobody inside the bakkie belonging to the freeway maintenance crew that was working on site.

A male passenger who was travelling with the hospitalised driver allegedly started assaulting the two injured females and the truck driver after the accident.

Officers are hunting him as he disappeared after assaulting the three. It is also alleged that the assailant could be the cause of the accident by fighting with the woman driver inside the moving vehicle when the crash occurred.

The EMPD Freeway Unit officers have registered a case of reckless and negligent driving at the Kempton Park police station.