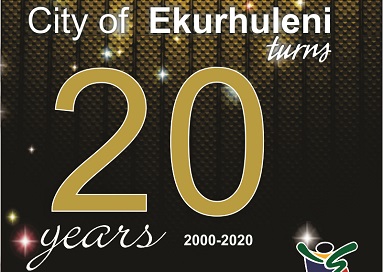 City Of Ekurhuleni Celebrates 20 Years since Its Establishment Today

The City of Ekurhuleni celebrates 20 years birthday today (5 December 2020). The City was established from an amalgamation of 11 administrations and nine towns in 2000.

The journey to establishing an effective and efficient local government started with the mammoth task of having to merge the different administrative systems responsible for governance and service delivery in the nine towns and 17 townships.

Since inception, the City of Ekurhuleni’s population has grown form 2.5 million in 2000 to 4 million today. The City continues to strengthen its infrastructure so that it can handle the ever-growing population.

COE is a major economic and social role-player in South Africa by means of its strong industrial characteristics and contribution to the national economy, and the size and extent of the population that is reside within its administrative boundaries. With a gross domestic product of R334 billion in 2018 (up from R160 billion in 2008), the COE contributed 19.67% to the Gauteng GDP of R1.7 trillion in 2018 increasing in the share of the Gauteng from 19.57% in 2008.

We look forward to many years of providing quality service to the people of Ekurhuleni.