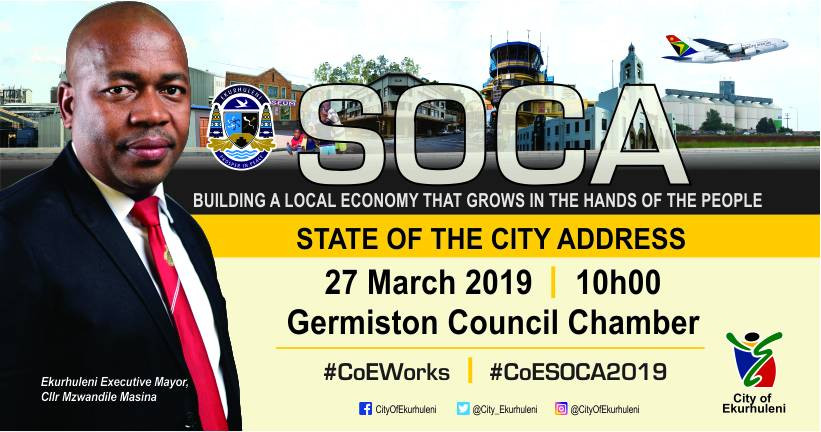 Executive Mayor Masina to Deliver The State Of The City Address

Ekurhuleni Executive Mayor Cllr Mzwandile Masina will deliver the State of the City Address (SOCA) on Wednesday, 27 March 2019, at the Germiston Council Chambers, under the theme, “Building a local economy that grows in the hands of the people.”

Through the speech, he will report on the profound milestones the Administration has achieved this past financial year and layout the City’s priorities for the upcoming year.

Mayor Masina will reflect on the strides the City has made in delivering quality services to its residents, a point already noted by the Gauteng Region Observatory (GCRO) Quality of Life Survey (QoL) 2017/2018 which rated the City as the “Best Performing Metro in Gauteng Province”. He will also reflect on how the City has continued to revitalise the local economy through good governance and socio-economic transformation.

The City of Ekurhuleni received an unqualified audit opinion from the Auditor General’s (AG) for 2017/2018 Financial Year. The City did not incur fruitless and wasteful, and unauthorised expenditure in the 2017-18 financial year among other achievements.

Provisions for public viewing has been made in all communities and live-streaming on community radio stations and social media, from 10h00.