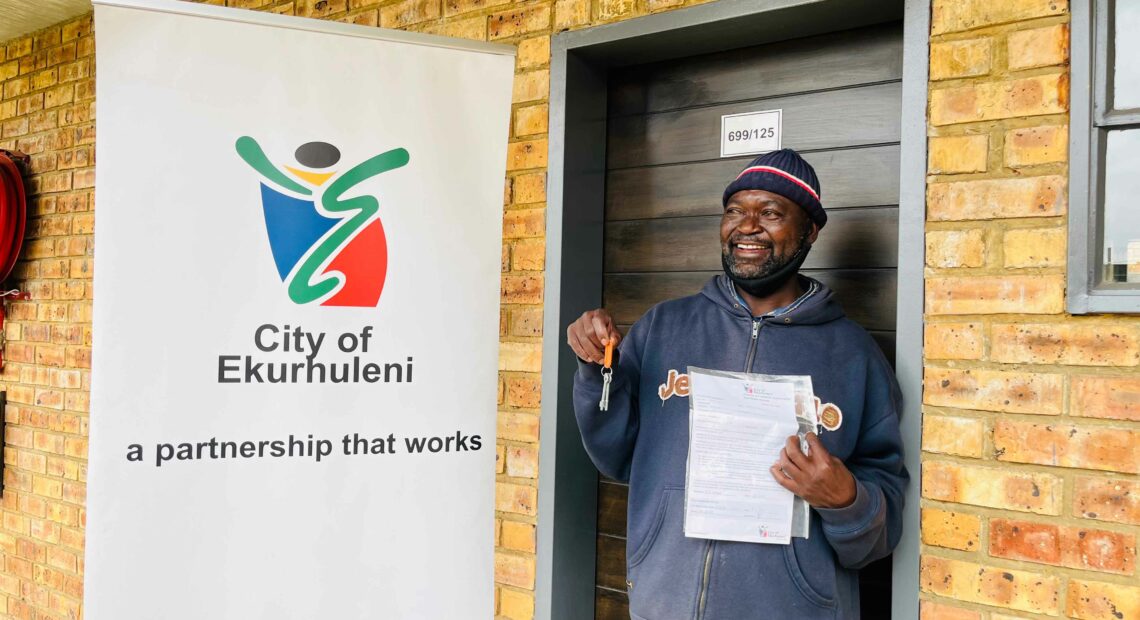 In keeping with the City’s commitment to providing decent and proper housing to the people, the City of Ekurhuleni on Thursday, 4 November 2022, relocated 114 residents from Cinderella and Central hostels and Hlahane and Crossroads informal settlements to newly finished housing units at the Leeuwpoort Mega Housing Project near Rondebult in Boksburg.

Altogether, 152 units are complete and delivered to the targeted locals in wards 32, 34, 42,43 and 93 which included Cinderella and Central hostels; and Hlahane and Crossroads informal settlements.

The project created jobs for 308 workers on site and 29 subcontractors comprising 22 locals and seven specialised subcontractors for a period of about 10 months.

A total of approximately R680 million has been spent by the City on the installation of engineering services such as roads and stormwater, water and sanitation; and electrical installation works.

An elated Beauty Noqhethe (59), who lived at Cinderella Hostel, admitted that she felt that the City had restored her dignity.

“It is the happiest day of my life. I moved in with my two grandchildren after living in deplorable conditions for years. We are overjoyed to have received our warm and spacious home just in time for Christmas. My eldest granddaughter now has her own bedroom, which feels like a dream,” Noqhethe said.

Lucas Matladi, an elder of Cinderella Hostel and first-time homeowner at the age of 85, said he was relieved to move into a new home after years of struggling to make ends meet as a seasonal farm worker.

“I’ve never been a homeowner. I lived in a backyard rental for most of my time while juggling farming jobs before relocating to the Cinderella Hostel in 2010. Finally, my son and daughter will have a place to call home,” said Matladi.

The Leeuwpoort Mega Housing Project is one of nine mega housing projects being undertaken by the City. These Mega Cities are characterised by mixed-use housing, ranging from free low-cost (RDP housing), affordable rental accommodation as well as bonded housing, financed in partnership with the banks.