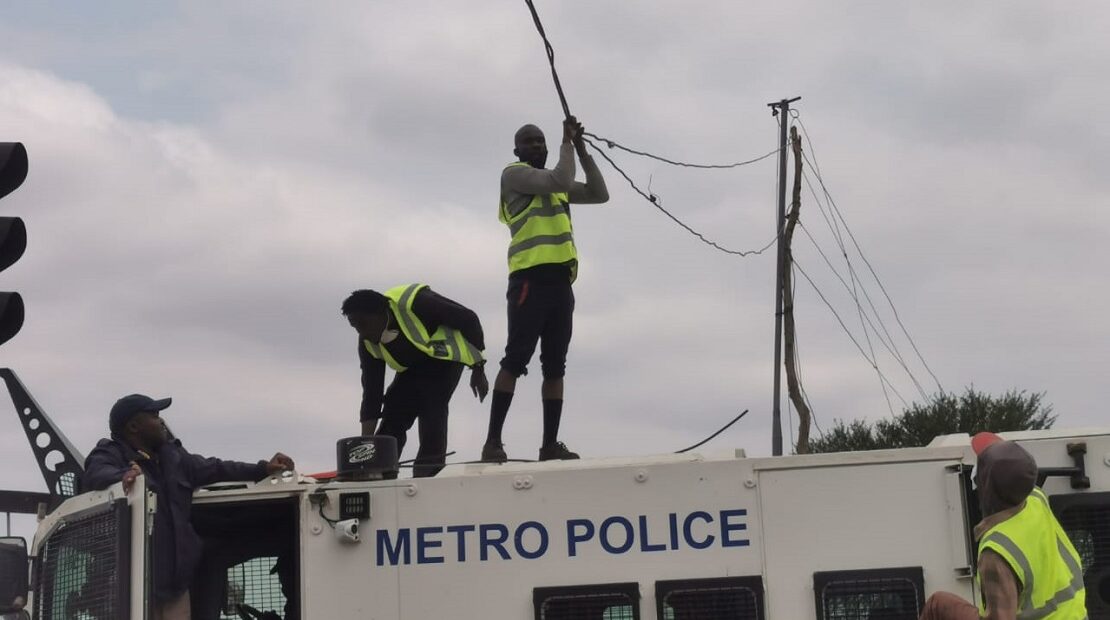 Illegally connected copper cables and forged pylons were removed in Boksburg during an operation conducted by EMPD, SAPS as well as the City’s Energy Department and a private security company on Tuesday and Wednesday (22 – 23 September). Areas targeted were Delmore, Jerusalem and Angelo.

Wit Deep Road between Commissioner and Main Reef, including Main Reef Road between Pretoria and Homestead, were closed to traffic between 08h00 and 16h00 on Tuesday during the operation. Residents who seemed not pleased about the disconnection threw stones and foreign objects at members, fortunately no casualties were reported.

During the operation some EMPD Public Order Policing Unit members had to respond to an emergency at the corner of Old Elsburg and Commissioner roads (Reiger Park area) where passing vehicles were being stoned by a group of people. The three females and a male suspects between the ages of 25 and 42 were caught red handed and handcuffed.

On Wednesday (23 September) the operation continued with manageable hiccups between 09h00 and 12h00. At 14h00, the EMPD First Respond and Public Order Policing units responded to trucks being looted and stoning of passing by motor vehicles on Wit Deep Road. The EMPD teams, trained in the likes of crowd management and house penetration, moved in and apprehend four male suspects between the ages of 23 and 43 caught stoning cars passing by.

The arrested seven face charges of public violence with malicious damage to property and will appear in court soon.

For now, motorists are advised to be cautious when driving around the mentioned areas. Together with other law enforcers, EMPD will continue to patrol and monitor the affected zones.