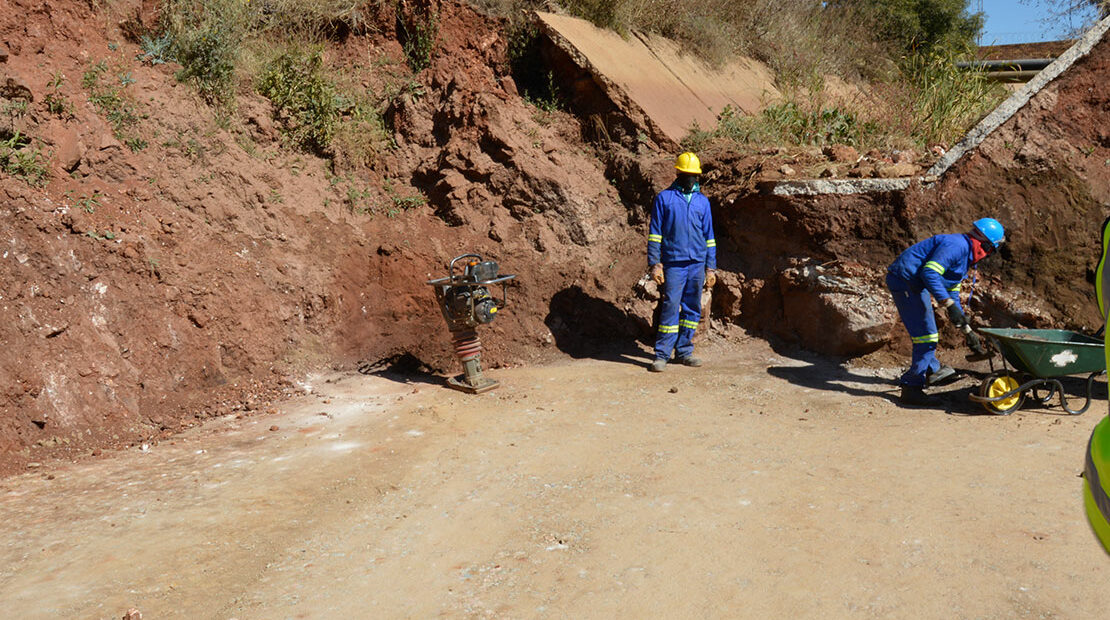 More Work Still to be Done On Thembisa Sinkhole

The City is closely monitoring the sinkhole that developed along the R562 (Olifanstsfontein Road) next to Phumulani Mall in Thembisa.

Preliminary investigations show that the collapsing of the stormwater channel and the flash floods that hit the area in January left a sinkhole. It has grown to about 20m in diameter and is 6m deep.

Due to the risk of water from a municipal pipe that passes through, leaking into the sinkhole and aggravating the situation, the City had to re-divert the 400mm bulk water supply pipe 160m away from the sinkhole.

The gas pipe and power cable were also re-diverted to minimise the impact of the then developing sinkhole.

The City’s planning geotechnical section instructed its geotechnical consultant to conduct an assessment report on the cause and recommendations in terms of repair processes.

As part of rehabilitation, bulk excavation work is done and the team is now busy with layer work of backfilling the sinkhole with appropriate soil. This follows the technical specifications.

Ekurhuleni is 58% dolomitic, leaving a low proportion of land free from dolomite.

The dolomitic area is usable but needs a wide variety of methods aimed at reducing the risk of damage to structures due to subsidence settlement. The methods include compacting the soil, deep foundations and soil improvement by consolidation.

Even if the land has not been identified as dolomitic, it is important to always vigilant about the unexplained development of holes on the ground. Water leaks have to be fixed with immediate effect as they are the main contributors of sinkholes around the City.

The City’s Geotechnical Division headed by chief engineer Glory Momubaghan continuously investigates and analysis to verify incidents of dolomite in the City.

He explained the dynamics of dolomites, “Engineering geology is the study of the engineering properties of the rocks and the soil. One gets to know how rocks and soil may behave when structures are placed on top of them. It is the study to look into the interaction between the rock, soil and the human,” he said.

He elaborated dolomites and geology is not all the division is about; it also scrutinises and passes building plans that are submitted to the City in line with the town planning scheme. “Every building plan that needs approval, every geotechnical report that is summited for approval has to be scrutinised by our division. We need to make sure that everything that has to be done is done before we approve any report submitted,” Momubaghan said.