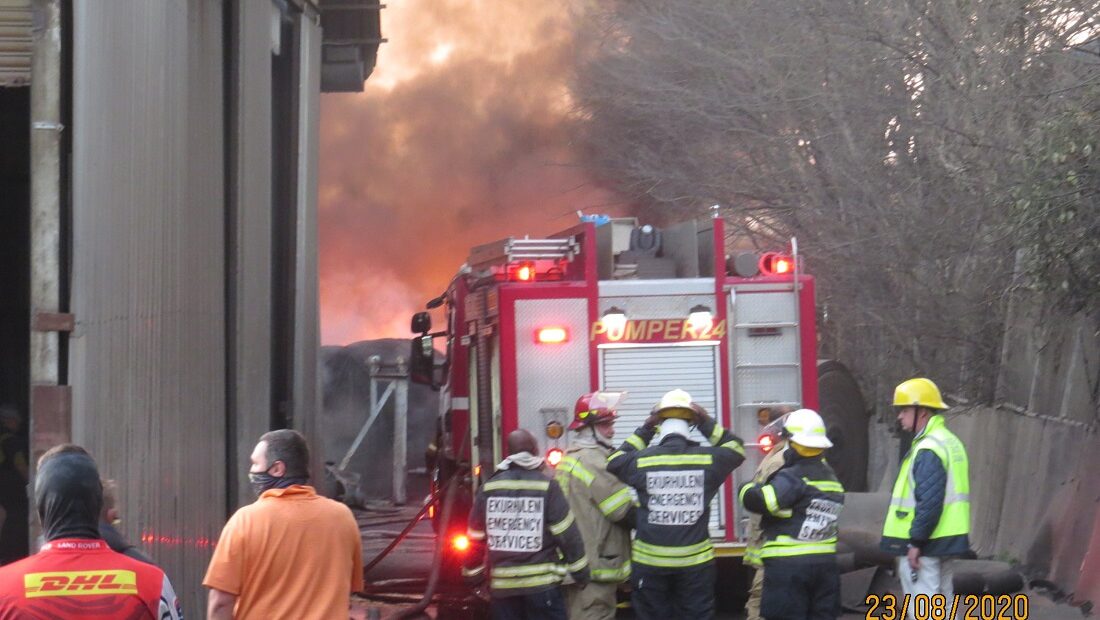 Rubber Factory Goes Up In Flames

What was initially perceived as a veld fire turned into a tyre factory that was in flames in Springs on Sunday afternoon, 23 August.

Emergency Services were contacted at 15h31 and local firefighters dispatched. Already while on the way, the crew identified heavy thick carbon smoke coming from the direction of the address given.

On arrival they found a rubber factory on fire. More resources were called in from Brakpan, Selection Park, Kwa-Thema, Daveyton and Etwatwa fire stations, for back-up due to the risks involved. A total of 30 firefighters and fleet of eight fire engines were on scene throughout the night containing the fire.

Large rubber bales used to manufacture various products, including conveyor belts, were on the premises.  It is believed that the veld fire burnt through the perimeter fence and ignited the material on site. The fire spread to neighbouring factories.

Direct defensive fire suppression was initiated upwind by the first arriving unit. Street hydrants were used and water relayed via the fire engines. As more resources arrived on scene, more attack lines were established to contain the blaze and structural protection. Six attack lines were established throughout the entire operation. Working together with the company employees, fire breaks were made by moving unburnt rubber bales away to prevent fire spread.

The operation went on throughout the night under floodlights and a new crew was brought in this morning to relieve the already exhausted first responders. The blaze is extinguished, and teams are cooling off (damping down) the hot spots of the burnt material.

No casualties were reported.