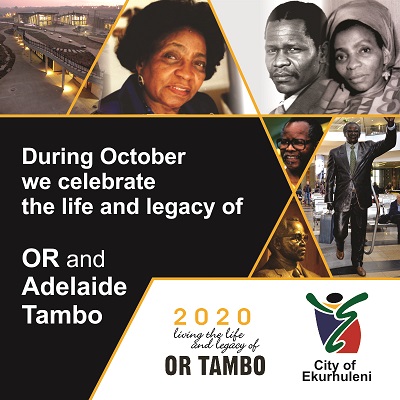 Celebrating the Life and Legacy of or Tambo

In memory of Oliver Tambo, the month of October was declared OR Tambo Month, and the City of Ekurhuleni is hosting various activities throughout the month to honour the life and legacy of this struggle icon who was a resident of the City.

Oliver Reginald (OR) Kaizana Tambo was born on 27 October 1917. He was a South African anti-apartheid politician and revolutionary who served as president of the African National Congress (ANC) from 1967 until 1991.  Sadly, he passed away on 24 April 1993 and buried alongside his wife Adelaide at the Tamboville Cemetery, located in Wattville, Benoni.

The City is home to the iconic OR Tambo International Airport which was named after this struggle icon in 2006.

The theme for this year’s commemoration is ‘Drawing on OR Tambo’s legacy to help fight global pandemics of Covid-19 and Social Injustices’.

As the country grapples with the Covid-19 pandemic OR Tambo, as a man of integrity and a disciplined cadre, would have told his people to always take care of themselves by following precautions such as social distancing, washing hands at least for 20 seconds and to wear face mask.

These are the some of the activities which the City has lined up to celebrate OR Tambo: